Little-known Malawian aviation company Nyasa Air Charters was involved in a plot to purchase nine military aircraft from Egypt as part of an audacious plan aimed at laundering money and building a drug trafficking operation across Africa.

The deal could have seen some military planes sold to Mozambique while others were used by the Malawian registered company.

The 2020 deal to purchase the 9 obsolete Egyptian Air Force DHC-Buffalos, eventually collapsed but shows a picture of an elaborate scheme to build various businesses in aviation, agriculture, food and military equipment supply across the continent and beyond.

A Zimbabwe-registered company linked with the Kinahans also explored establishing an industrial cannabis business in Malawi before discarding the idea, according to the information reviewed.

Pictures, documents, and exchange of messages acquired by the Platform for Investigative Journalism, subsequently shared with partner International Consortium for Investigative Journalism (ICIJ) and the Irish Times paint, among others, previously unknown ties between Christopher Vincent Kinahan and Adam Lincoln Woodington Wood, a Zimbabwean businessman, Egyptian facilitators, and a one-time British mercenary. Kinahan is under US sanctions for engaging in narcotics smuggling and money laundering.

Kinahan, 65, is the leader of one of Europe’s most notorious gangs, a narcotics, money-laundering and arms trafficking cartel with ties to Asia, Latin America and the Middle East, too.

Believed to be living in Dubai, the convicted money launderer is also a suspect in murders. The United States has offered a $5 million reward for information leading to his arrest and conviction.

The leaked documents reveal that the pair were working with an Egyptian lawyer, Ibrahim Ibrahim El Desouky, and several Zimbabwe and UK-based aviation and financial figures tied to Wood as they attempted to pull off the deal.

Documents show sanctioned International drug lord Christopher Kinahan Sr. made an audacious bid with a cabal of associates to purchase a fleet of Egyptian military transport aircraft as he sought a safe haven and new bases along drug trafficking routes in Africa.

The documents are part of a cache of material that includes remarkable photographs of the crime boss.

The attempted purchase of Egyptian aircraft, never completed, was one of several efforts by the Kinahan cartel to buy aircraft and related equipment from African militaries.

At the time of the attempted aircraft sale, Kinahan faced passport fraud charges in Spain and appeared frequently in news articles detailing a wide array of his alleged crimes.

Kinahan initially introduced himself to his African aviation associates simply as  Christopher Vincent, but as their ties strengthened, and passports were exchanged, they realized who he really was.

Wood was named in correspondence between Sea Dream Middle East Trading and the Egyptian air force about the possible purchase of the aircraft and later went to inspect them.

And in 2020, Sea Dream’s managing director Ibrahim El Desouky corresponded with the Egyptian defence attaché in Abu Dhabi, Hisham Nabil Monir, in a bid to buy up to nine DHC Buffalo military transport planes for up to  $8 million.

An official document, written in Arabic and provided to PIJ and ICIJ along with screenshots of text messages, shows the Egyptian Government offered up to 30 planes for sale at first.

Between Jan 2020 t0 Sept 2021, El Desouky and the Egyptians continued to discuss how many planes are on offer, for how much, and the arrangements for a visit to inspect the aircraft at Almaza Air Force Base, in northeastern Cairo.

In February 2020,  Defense Attaché Monir sent Sea Dream a list of aircraft for sale, along with spare parts and equipment. The following month, the attache sent Sea Dream technical information related to the Buffalo and gave “the Egyptian Air Force’s approval” for a field inspection. to take place between March 10th and 15th. The team visited Egypt at least twice, the documents show in Dec. 2020 and May 2021.

In an exchange of letters in Arabic, Monir wrote that Sea Dream would be provided with lists of spare parts, including engines after an offer is received and requested copies of the passports of Sea Dream’s “technical inspection team.”

Monir identified the members of the team as Wood and — two of the men photographed with Kinahan at the Egyptian aviation conference — along with  Charles Robert Demblon, a Zimbabwean who holds a Belgian passport.

By December 2020, Kinahan and his associates are confident that a deal for the purchase of nine Buffaloes will go through, and they say they’re transferring millions of dollars to cover it.

“I will wait for the 10 million to be transferred to the company account,”

But El Desouky hints at trouble finalizing the deal in another message, where he states that the “90 per cent” down payment has been modified to a “not appropriate”

While the two sides attempt to negotiate a deal, El Desouky and Wood keep Kinahan – identified as CV DXB in text messages abreast of things.

Screenshots from a WhatsApp conversation dated Sept. 2021 showed Kinahan notifying his team: “the buffalo deal is now officially closed.” A copy of a letter that would be sent to the Egyptian defence ministry listing a number of technical problems in the aircraft to justify the cancellation of the deal.

Information we have reviewed shows that Kinahan failed to raise money to pay for the aircraft, Egyptians became impatient, and el-Desouky’s family in Egypt became at risk.  Kinahan assured El Desouky and called him: “Little brother.”

Wood used Nyasa Air charters to back off the deal when it became apparent that the Kinahans could not raise the funds to go through with the deal.

“As a company, we have investigated all possibilities, and we have been unable to convince Malawi Civil Aviation Authority to waive any of the rectification requirements, due to a number of reasons including a pending compliance audit of Malawi’s Department of Civil Aviation by ICAO.

Consequently, the added expense has rendered the whole project untenable at the price that has been set by the Egyptian military after more than eighteen months of negotiations,” wrote Wood.

Malawi’s Transport Minister Jacob Hara pledged to investigate the findings of the links between Nyasa Air Charters and the Kinahan gang.

The investigation provided an unprecedented insight into the double life that  Kinahan, who is rarely photographed, has been living while posing as business and aviation consultant Christopher Vincent.

In the photo, Kinahan and Wood sport conference lanyards around their necks, wear luxury watches tight on their wrists and have two phones each close at hand on top of a glass table.

The conference was attended by people who deliver air services to charitable and disaster relief programs.

Kinahan’s attendance shows that he was establishing his credentials as an air emergency service operator in the months before Wood and he sought to buy planes from the Cairo government.

In one photo, Kinahan, dressed casually in a light blue shirt and grey trousers, is grinning alongside Adam Lincoln Woodington Wood, a Zimbabwean businessman. El Desouky runs a legal consultancy in Dubai.

Kinahan and Wood attended the conference on Egypt’s Sinai Peninsula with a colourful Irish-born, London-based security expert by the name of John Nammock.

Curiously, Nammock first came to public attention when he was convicted alongside 12 other mercenaries in Angola in 1976 of crimes against peace and Angola. He narrowly avoided execution.

Kinahan worked with Nammock, El Desouky, James Whittington Landon and a Zimbabwean who carries a Belgian passport called Charles Robert Demblon worked together on the Egypt deal.  Kinahan also tasked him to act as a security chief for one of his companies and use Nammock’s connections to U.N. agencies to win deals.

Taken together, the images and documents show Kinahan, under the guise of Christopher Vincent, building international relationships with established air relief partners to rebrand his image.

But it quickly became clear that Kinahan had a more sinister intention: to launder drug money and move drugs along trafficking routes across northern Mozambique.

At Home in Africa

The images shared with PIJ and ICIJ showed white-haired Kinahan dressed in a light blue shirt, grey trousers, and black shoes sitting next to his alleged associate Adam Wood, a Zimbabwean, and manager of a series of companies and restaurants in the UAE, Malawi, Singapore, and other countries.

In photos obtained by PIJ, Kinahan can be seen holding court in the comfortable surroundings of a hotel in Harare, Zimbabwe, called Amanzi Lodge. The photos, from September 2019, show Kinahan, Wood and Eldesouky with African and Iranian businesspeople at tables on a terrace after lunch.  The group occupied rooms and spent four nights at the hotel, a copy of the hotel reservation showed.

Many of the diners had ties to Crescents and Crosses, which had been working closely with Nyasa Air and was attempting to take it over.

Documents shared with PIJ and ICIJ show that Kinahan started a new aviation company called CV Aviation Consulting Services DWC-LLC nearly a year before he was placed under sanctions by the US in April. A licence carrying the “Dubai Government” name and logo read: “With reference to the above subject, Dubai Civil Aviation Authority has no objection to (Issue) in order to proceed with its activities,” the document read. The company address is in Dubai South Business Park, one of UAE’s secretive freezones.

The name of the applicant is Neslihan Yildirim whom the insider described as Kinahan’s wife. Irish police described her as a “long-term partner”. LinkedIn shows Nessy (most probably short for Neslihan) Yildirim identifying herself as the founder and CEO of the company.

The open-source database shows that she also owns an olive oil trading company in Marbella, Yildirim holds both Turkish and Dutch passports and was born in 1975.

Yildrim is believed to be the mother to three of Kinahan’s children. The two attempted to marry in Zimbabwe and settle in Harare, according to some insiders. 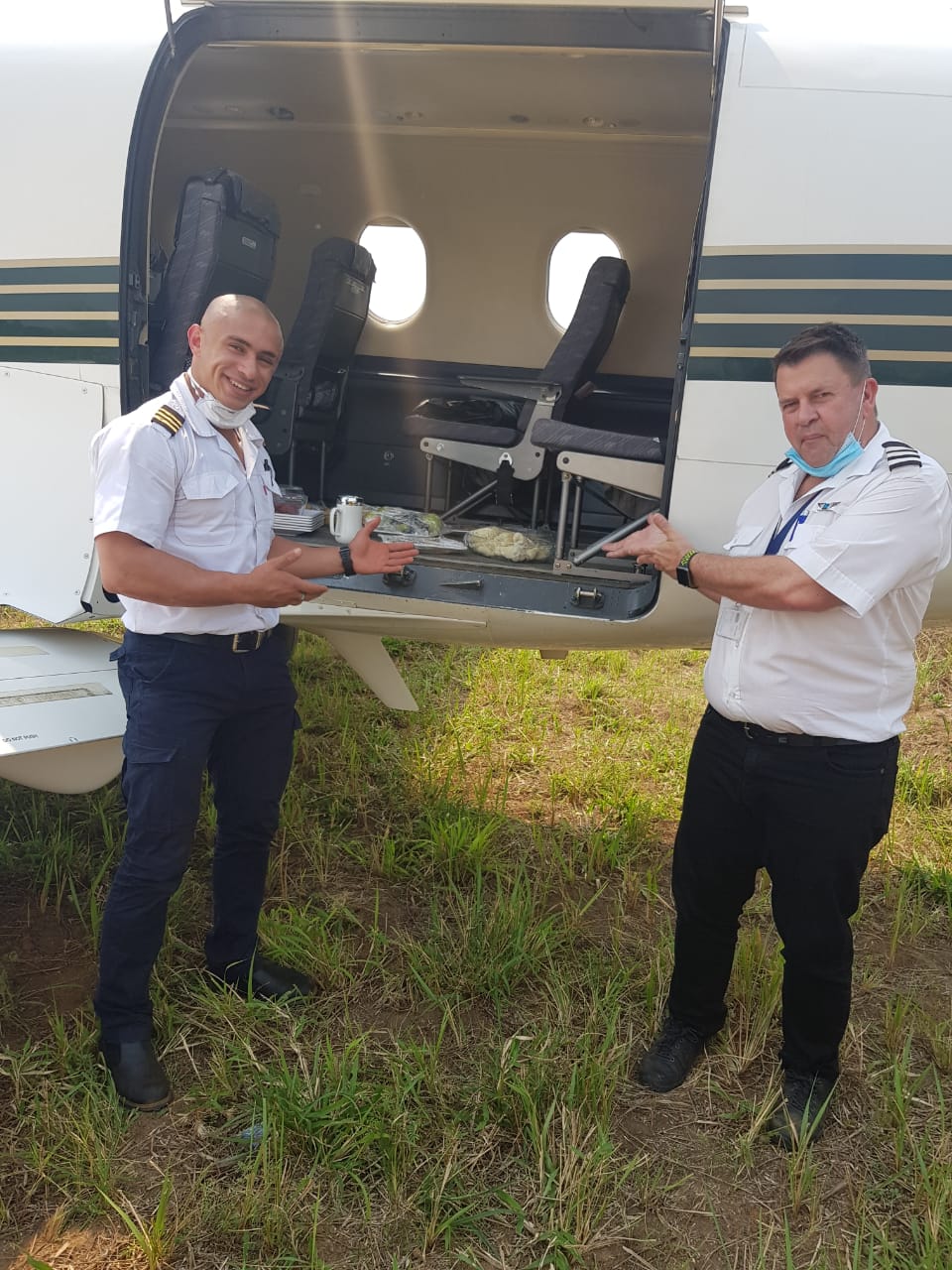 Kinahan sought to establish a base in Zimbabwe, but was forced to abandon his plans after being denied permanent residency.

Kinahan flew frequently to Zimbabwe, where he had joint business interests with Wood, who is involved in aviation, property development and agriculture, including in a company that sought a medical marijuana licence.

The Irish police confirmed that all Kinahan’s attempts failed after the authorities in Zimbabwe blocked him when they started to liaison with the US.

Wood, Kinahan, Yildirim and an Emirati called Samir Hussein Habib Sajwani established CV Aviation in Dubai in 2020. Sajwani was listed in a Dubai Civil Aviation Authority license as the director of CV Aviation.

The cache shows that even after the US sanctioned Kinahan and offered a  huge reward for his arrest and conviction in April of this year,  Sajwani acted for the company, located in Dubai South Business Park, a sprawling, secretive free zone.

Just seven days after the sanctions were imposed, Sajwani named Adam Wood as the company’s Chief Operations Officer, authorizing Kinahan’s close confidante to sign and execute all documents on his behalf of it.

The Kinahans have been getting away with murder for years.

After first distributing heroin and cocaine in his native Ireland in the 1990s, Christopher Kinahan Sr., now 65, and his sons, Daniel and Christopher Jr., expanded their organization to the U.K. and mainland Europe.

The new cache reinforces those reports that authorities in Dubai turned a blind eye to the Kinahans’ activities and well-connected local intermediaries have been assisting the cartel. The UAE has now frozen Kinahan assets.

Following the Mafia’s lead, the gang set up hundreds of companies, many reputedly in hospitality and real estate, to hide and move huge quantities of cash made from selling drugs, according to Europol.

You may have missed

NOCMA FILES: ZAMBA, THE CHIEF AND THE DOOMED PLAN OF THE NEW OIL CARTEL

THE PERILS OF UNSAFE ABORTIONS