By many accounts, Nsanje – home to some 300 000 people – is one of Malawi’s poorest districts, lagging behind in many human development indicators.  An estimated 81.2 per cent of its population is ranked as poor–living on less than a dollar a day, and 56 per cent as ultrapoor.

During colonial rule and the early days of one-party rule, Nsanje was a thriving economy with a railway line that connected the rest of Malawi to Mozambique hence onward access to the sea–a vital trade route.

The shire river, one of Malawi’s most strategic water sources, passes through Nsanje before surrendering its water into the Zambezi river and onwards to the Indian Ocean.

It’s a water passage that had Bingu wa Mutharika, Malawi’s third president, dreaming of ending Malawi’s landlocked status by building a canal that would allow ships to dock here at an inland port. His administration constructed the canal without the approval of neighbouring Mozambique.

Today, the Inland Port is a heartbreaking, expensive white elephant. No ship or barge has ever docked here. Nor is it the only expensive elephant here.

Some projects, whose total value is a whopping 298 million kwacha, have, for all intents and purposes, been abandoned. Some are in a dilapidated state despite the fact that they have never been used before. Some have been turned into free rest houses by people seeking free space for sex, while others have become a security scare as residents fear they have become hiding grounds for criminals.

Those projects include the construction of Nsanje’s new bus terminals and the new main markets at the boma and Tengani Trading Centre, awarded to Wisdom Construction Limited at a cost of K297,916,423.69 in February 2016.

The projects, which were supposed to be completed by 2018, have been abandoned by the contractor and government for over three years despite costing the taxpayer huge amounts.

Initially, the contractor was supposed to construct just a depot and market at the district headquarters, but the scope of work changed to include a market and depot at Tengani, according to a memo from the Director of Buildings dated April 21, 2021, addressed to the Secretary for Local Government, copied to Nsanje district council.

The memo adds that the changes would incur additional costs, which will see the contract sum rise by 14.6 per cent. The final total project contract amount was now projected to be K341,423,836.60.

“Request is being made to your internal procurement and Disposal Committee to seek approval to spend the projected final amount of  K341,423,836.60,” reads part of the Memo.

Once the changes are approved, those close to the project say, the ground would be set for the provisions for the additional projects which are supposed to be included as an addendum.

Nsanje District Council’s Internal Procurement Committee (IPC) is first supposed to approve a resolution to add the contract addendum before seeking a ‘No Objection’ from the Public Procurement and Disposal of Assets Authority (PPDA). None has happened yet.

Meanwhile, the projects are fast, dilapidating and not serving their purpose.

In absence of meaningful activity, the projects are serving unintended purposes, however.

PIJ spot checks at the abandoned bus depot revealed a site of despair. The grounds are partly bushy and have blue plastic garbage dominating most places. The depot stall structures have doors, but without burglar bars. People pass through the wide open spaces.

The depot’s structures are now being used as open toilets, storerooms and convenient sex points. Used condoms can be spotted at several spots within the premises, including in the toilet structure.

In the so-called toilet room, we also spotted a bamboo mat. The other toilets are also being used as storerooms. We found some market baskets and other personal belongings on the premises. 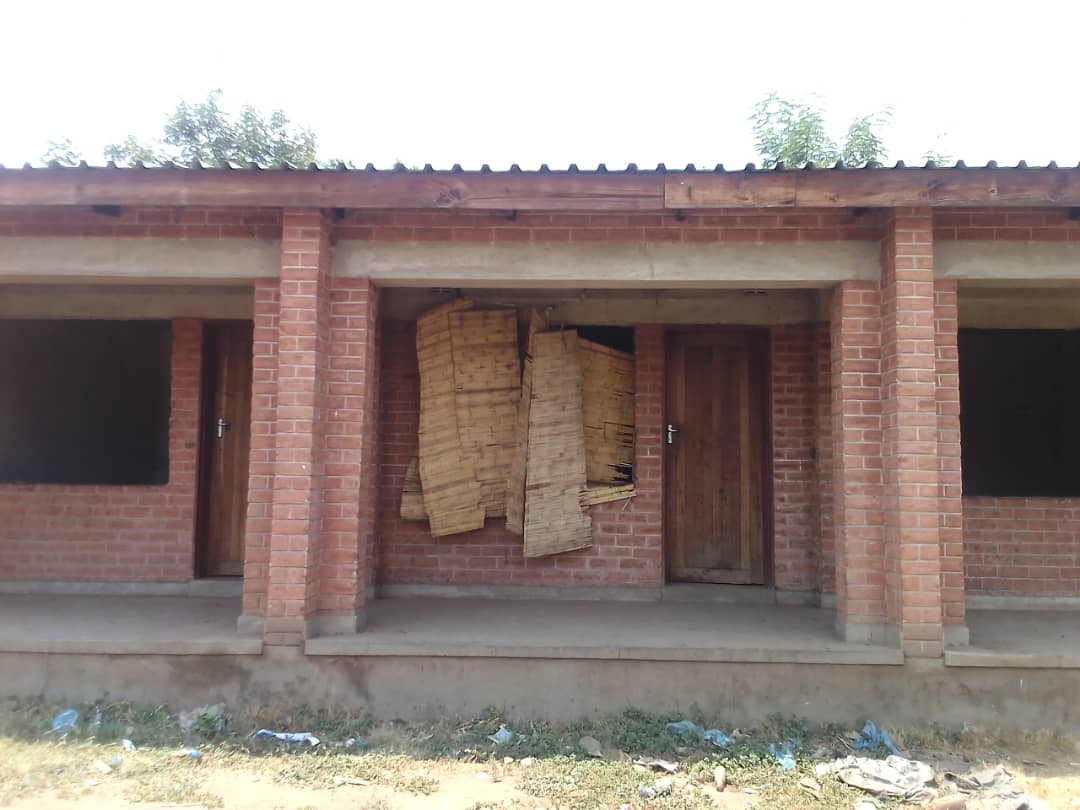 These structures,  residents say, are now being used for people to have sex for a fee to the guards manning them.

“Most people who patronise this place live within the vicinity of the Boma. We may not know each of them since people conceal such acts, but it’s a common secret that people prefer this place for a ‘short time’  because it’s considered cheaper. They pay K400 to the watchman whilst at the surrounding rest houses the cheapest range from K1,500 to K2,000 for the same activities,” says Chairman of Nsanje boma Market vendors, Samson Folopensi.

Chitani Winiko, the guard, disputes the allegations, saying while it is true that people keep their things in the structures, the premises are never offered to people for sex: “All the condoms you have seen are mine….. These are used for my protection,” he told PIJ.

The Contractor for all four projects, Wisdom Constructing Limited, terminated the contract with the government on August 15, 2022, on grounds of continuous delays by the government to pay for completed phases of the project, according to documents we have reviewed.

“Communication has been erratic and not promising throughout project execution. I hand-delivered both letters to the Ministry of Local Government, the Director of Buildings and the Director of Public Works at Nsanje District Council because he facilitated the whole process. I only received verbal communications where I was told that this contract’s additional instructions cannot be approved because it means more money to be spent considering the devaluation,” the company’s Managing Director Innocent Tomeo told PIJ.

The contractor moved out of the site with all equipment on August 20, leaving behind only a container and a security guard.

The Ministry of Local Government, through a spokesperson, dismissed the assertions, arguing that the ministry honoured all payments for certified completed work. (PIJ could not establish whether the contractor was paid or not.)

Despite the inactivity of the four projects, Deputy Minister of Local Government and Rural Development, Halima Daudi officially opened Nsanje District and Tengani Markets in March 2021.

The Ministry of Local Government and Rural Development, Nsanje District Council and the Contractor, separately, said that the district market still needs to be completed.

According to the Ministry of Local Government and Rural Development, there were two project lots and two contractors. One contractor completed his lot and was ready for use, hence the handover to the users.

“The other side had an Addendum. This addendum arose because there were changes in the scope of work…… The contract sum less the addendum is MK 297,916,423.69 funded under the Ministry’s vote- Construction of Rural and Urban Markets,” said Ministry of Local Government Spokesperson, Anjoya Mwanza.

But residents are not impressed and in various interviews lamented the lack of transparency around the state of the projects.

“ All we know is that when the minister came to open part of the market. We thought this was a handover from the central government. But there is nothing else happening on these projects. At one of the full Council meetings, we agreed to close one part done by Wisdom Contractor, considering the time that has elapsed. We aren’t aware whether he was paid all his money or not since we have no supporting evidence. We are ignorant of what is keeping him from completing the assignment,” said Mike Katalachi, a ward councillor serving as the current Nsanje district Council Chairperson.

Malawi is a member of the Construction Sector Transparency Initiative (CoST) which is aimed at increasing transparency and accountability in public infrastructure projects. The three projects, however, do not appear on CoST Malawi’s 2017 launched Disclosure Portal for Public Projects.

One of the vendors at Nsanje Market, Francis Malamba said in an interview, although the market is partly open, it lacks many convenient things making it health hazardous, citing congestion as one of the things.

“The depot completion delays have also affected us. There are a lot of young men who could get piece work from the depot operations. And other people who are operating in this market would also be operating businesses within the depot premises as well,” Malamba said.

“This new market is our saviour, a hope for our economic woes. Every year, we lose goods worth lots of money to floods. This has affected our economic progress. The place we call the market now is accident-prone and not worthy to be called a market. Surprisingly, the Council still collects market fees ranging from K150 to K200 from us daily,” Dzowa said.

Nsanje District Council Spokesperson Robert Nayeja attributed the information gap on the project which is managed by the central government (ministry of local government) with the Council reportedly bypassed and uninvolved in project supervision.

“This made it hard for project information to trickle down to the relevant local structures. Even now, we don’t have enough information about what’s happening to these projects. We have nothing to update the people with,” Nayeja said.

Reacting to the findings, National Construction Industry Council (NCIC), which has regulatory powers and hence would come in if there are regulatory or ethical breaches, said if the findings presented by PIJ were correct, there was a need for an audit to review the implementation of the projects.

NCIC Corporate Affairs Officer, Lyford Gideon, said an audit would highlight the specific challenges in the projects and allow authorities to review options available as a way forward.

Gideon suggested that options in the current case could, among others, include, approving the addendum to ensure the project is completed, terminating the contract on mutual agreement, on grounds that it is no longer attainable, the client getting back to the site to complete the project or identifying a new contractor to complete the works when the ministry gets necessary resources.

“It should be noted that termination of a contract is not a cheap process, thus in most cases, parties are hesitant to terminate unless they have a valid contractual reason. In that case, it could frustrate the contract,” Gideon said.

You may have missed

NOCMA FILES: ZAMBA, THE CHIEF AND THE DOOMED PLAN OF THE NEW OIL CARTEL

THE PERILS OF UNSAFE ABORTIONS